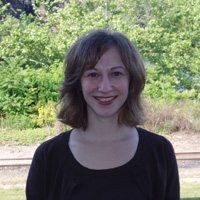 Maintenance of the genome is critical for the survival and health of an organism. Genomic mutations and alterations promote cancer, and the incidence of cancer increases exponentially with age. My lab is investigating the mechanisms of genomic instability associated with aging and diseases related to aging.Telomeres are a region of the genome that profoundly influences life span, human disease and genome integrity. Human telomeres are protein-DNA structures that preserve chromosome ends and limit the replicative potential of somatic cells. Increased loss of telomeric DNA and telomere dysfunction have been observed in several diseases assoicated with aging, progeroid disorders, and after oxidative stress. Our goals are to understand mechanisms of telomere loss and the cellular processes that preserve telomeric DNA. Given the critical role of telomeres in aging and cancer, we believe this knowledge should aid in the design of intervention therapies that prevent or delay the onset of aging-related diseases and cancer.

Several human genetic disorders caused by defects in proteins that maintain and repair the genome also show features of premature aging. Among these disorders, Werner syndrome (WS); is remarkable in that patients prematurely develop numerous clinical symptoms associated with aging including cataracts, osteoporosis, atherosclerosis, type II diabetes mellitus, and cancer. WS results from loss of the DNA repair protein WRN. Previous studies indicate that WRN protein is important for preventing deletions and loss of telomeres, and that dysfunctional telomeres contribute to the disease pathology. Our working hypothesis is that unrepaired damage to telomeric DNA contributes direclty to telomeric DNA deletions and loss, and that WRN protein preserves telomeres by preventing and/or repairing breaks in telomeric regions of the genome. The guanine rich repeats in telomeric DNA sequence make it highly susceptible to the formation of bulky structures (G-quadruplex DNA); and oxidative base damage that can hinder DNA replication and lead to telomeric breaks and deletions. We propose that WRN protein may prevent deletions during replication of telomeric DNA by resolving blocks to the replication machinery that occur spontaneously or from oxidative damage. We are using complementary biochemical and cellular approaches to 1); define the mechanisms of increased telomere loss associated with WS and to 2); define roles for the WRN protein in telomeric DNA replication and repair pathways. We are also using FRET and single molecule analytical approaches to measure and examine the activity of WRN protein on telomeric substrates and G-quadruplex DNA in the context of telomeric proteins TRF2 and POT1. These studies should contriubute to our understanding of the consequences of telomeric DNA damage and of telomere preservation processes.